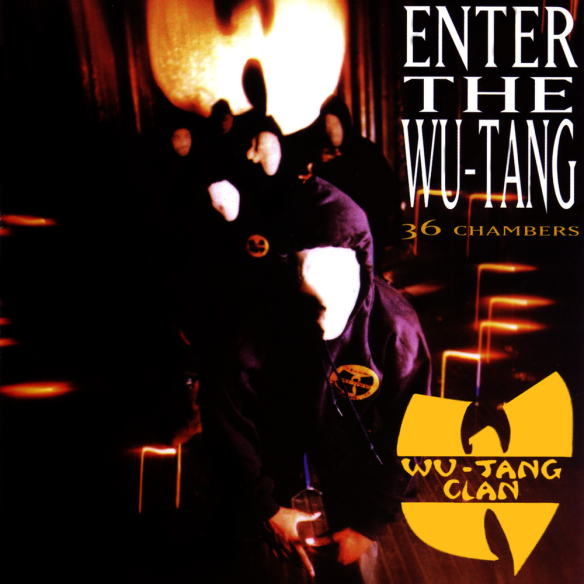 In the spirit of your most recent assignment for me, I’ve also got a ‘back to the basics’ assignment for you this week. My first assignment for you was Deltron 3030, an underground rap classic. And I know you’re a fan of a lot of other modern underground/alternative rap, like MF DOOM and Run the Jewels. I’ve also often noted that I’ve heard the DNA of some of my favourite modern music in older records you’ve assigned to me. This is going to be a long post, so please bear with me.

Your assignment this week, then, is nothing less than one of the most influential albums in rap history: Wu-Tang Clan‘s 1993 debut album, Enter the Wu-Tang (36 Chambers).

To understand why 36 Chambers was so influential, you have to know a bit about what hip hop was like before Wu-Tang. Rap music started in the late ’70s at street parties in New York City — specifically, in poor black neighbourhoods in the Bronx — thrown by guys like DJ Kool Herc. You’ve probably heard the song most often cited as the first recorded rap song, the Sugarhill Gang’s ‘Rapper’s Delight‘. This is pretty representative of most early hip hop music: an MC performing rhyming spoken raps over a looped disco beat. (Kurtis Blow’s ‘The Breaks‘ is another good example of this.) The rhyming schemes don’t usually get much more complicated than having the last syllable of a line rhyme with the previous one. The words are generally about dancing, partying, and the talents and general desirability of the MC and his friends, and the delivery is almost singsong. At this point, musically, rap is kind of just this weird offshoot of disco.

By the mid to late ’80s, however, rap has taken off in a major way. In what is now generally known as the New School era, artists like Run-D.M.C., the Beastie Boys, Public Enemy and the like are all becoming household names. Def Jam, a NYC-based label specializing in hip hop, is now a record industry titan. Beatmakers start using technology like samplers, drum machines and synthesizers in their production. Turntablism is born. Soul and funk music, particularly that of James Brown, is sampled extensively. You also start to see rhyme schemes get more complex — rappers like Rakim start using things like internal and multisyllabic rhyming, and move away from that distinctive ’80s singsong-style rap toward a more monotone, yet aggressive, delivery. (A lot of critics say that, in terms of lyricism, you can draw a pretty distinctive line in the sand in terms of pre-Rakim and post-Rakim.)

After this decade of explosive creativity, rap is now A Thing. It has coalesced from a scene into a genre, and now it’s expanding. On the West Coast, Dr. Dre and N.W.A (Niggaz Wit Attitudes) pioneer a style that comes to be called gangsta rap that focuses on the violent criminal lifestyles said rappers (claim to) lead. (Dre also pioneers a style called G-funk that features lots of smooth synth leads and highly synthetic drums.) Now there’s a sort of tension in the industry, because labels want to sell rap music to white people, but white people are kind of scared by black people who make songs with titles like ‘Fuck tha Police‘. So in the early ’90s, the major labels are still putting out rap, but it’s mostly a sort of ‘rap lite’ — marketable and completely inoffensive acts like DJ Jazzy Jeff & the Fresh Prince or Young MC.

In 1992, this is the musical landscape in which Robert Fitzgerald Diggs finds himself. His cousin, Gary Grice, has released a solo album as the Genius, but it was not particularly well promoted by the label. Diggs is pissed off at the industry for what he sees as an unwillingness to invest in music made by black street kids, from whence hip hop was originally begot. So, he formulates a plan: in five years, he and his high-school-dropout friends are going to take over the industry.

It’s an insane plan. But what’s even more insane is that it worked.

Drawing from the Supreme Alphabet, Diggs — formerly Prince Rakeem — rechristens himself the RZA. He rounds up his cousins and rap comrades Grice (now the GZA) and Russell Jones (Ol’ Dirty Bastard), and six others: Clifford Smith (Method Man), Corey Woods (Raekwon), Dennis Coles (Ghostface Killah), Jason Hunter (Inspectah Deck), Elgin Turner (Masta Killa), and Lamont Hawkins (U-God). Sharing a mutual love of kung-fu movies and Five-Percenter philosophy, they dub themselves the Wu-Tang Clan, after the practitioners of the most deadly sword style. In RZA’s Staten Island basement, he presents the Clan with his proposal: he has a plan to do nothing less than take over the entire industry — but the only way it will work is if he calls all of the shots. If you sign on, you’re essentially signing your career decisions over to him for the next five years, no questions asked.

The pact is made. RZA collects $100 from each member who wants a verse to produce the group’s first single, ‘Protect Ya Neck‘. It’s a gritty, lo-fi number literally made in a basement that doesn’t have anything you could really call a chorus, or even a hook. Instead, it’s got eight whiplash-inducingly different MCs trading verses for almost five minutes. RZA spikes his crunchy drum samples and eerie piano loops with kung-fu movie dialogue and a take-no-prisoners verse of his own. Verbally, the Clan is mixing post-Rakim lyricism with the violence and realness of gangsta rap, with a heaping dose of pop-culture references on top*. They bully a few local DJs into playing it, but they don’t have to try hard — it’s a dynamite record that sounds nothing like anything anyone else is doing.

Soon, hype for their first album is building. RZA is able to negotiate a unique deal with the nascent Loud Records. For a paltry $60,000, Loud gets the Wu-Tang Clan, but with a catch: the individual members of the Clan can pursue solo careers in any way they see fit, with any label they see fit, with the full backing of the Wu-Tang name. In 1993, 36 Chambers hits the streets, and it’s a smash hit. Already, RZA’s plan is working.

See, RZA’s plan isn’t really about getting the Wu-Tang Clan a record deal; remember, he wants to infiltrate the entire industry. So, almost immediately after 36 Chambers drops, RZA is back to work in his basement studio making beats for the first round of Wu-Tang solo projects. And RZA doesn’t just want his Clan members to get any old record deal — he uses specific members to target specific labels and markets. He knows Raekwon and Ghostface will appeal to the street/gangsta crowd. He knows the aptly named Genius will appeal to the college crowd. He figures Method Man has the most mainstream crossover appeal, which is why Meth gets one of only two solo tracks on 36 Chambers, and why RZA signs him to Def Jam. ODB is, as always, the wildcard. (There’s a great NPR On Record piece on this from which I am cribbing heavily.)

Over the next three years, RZA produces a whopping five Wu-Tang solo projects, all on different labels. All are well received. (He also somehow finds the time to join Prince Paul’s Gravediggaz.) And now, not only is the Wu-Tang name everywhere, but so is the sound. Cut-up soul samples are everywhere. Harsh, street-life rhymes are everywhere. The Ol’ Dirty Bastard is everywhere. Wu-Tang is nothing short of a movement. In 1997, the group reunites for a double LP, Wu-Tang Forever. It debuts at number one.

RZA has done it. In five years, he has taken over the industry, exactly as promised — and he’s kickstarted a major East Coast rap renaissance in the process.

So, how does 36 Chambers hold up in 2015? Well, I think the first thing you’ll notice is how modern it sounds. It’s certainly a product of its time, but it’s not that big a leap from this record to something like Deltron 3030 or Madvillainy, or even RTJ2. To use a comparison I’ve used before on this blog, 36 Chambers is the Seinfeld of underground rap: to a modern ear, its explosive originality is essentially invisible, because so much of what set it apart from its contemporaries has been so widely adopted in its wake. Lots of rappers and producers owe their entire careers to the sound pioneered by RZA and the Clan, musically and lyrically. (Kanye names RZA as one of his biggest production influences.)

Of course, the Clan ended up being a bit of a victim of its own success. At the conclusion of the five-year plan, RZA took on more of a managerial role in the Clan, and its solo and group efforts thereafter have been met with very mixed responses. Ol’ Dirty Bastard, arguably the biggest mainstream success story of the clan, was in and out of prison and became increasingly unstable, as so many big musical personalities do, and eventually died of a drug overdose in 2004. And of course, the Wu-Tang sound and name being everywhere became a problem in itself; listening back on them today, the first round solo projects all sound kind of samey**. They oversaturated the market. He who fights monsters and all that.

Having now written 1,400 words about a 60-minute rap album from 20 years ago, I realize this is a lot of baggage to have to unpack. But luckily, even without this tome, 36 Chambers stands up on its own merits. Even though there are nine full Clan members, the chemistry between them is electric. (Don’t worry too much if you can’t pick everyone out by name by the end of the first listen, although a few are bound to stick in your mind. I’m curious to know who, though, and why.) The corny kung-fu dialogue, the sludgy soul loops and bloated low-end, the ghostly bit-crush of the RZA’s shitty sampler — it all just works. Even without the backstory, 36 Chambers is just a damn good rap album.

I hope you enjoy it.

* This is yet another rabbit hole in a post already full of rabbit holes, but there’s a very interesting discussion to be had about the idea of masculinity in the lyrics of 36 Chambers. Maybe not on your first listen, but when you’re more familiar with the record, pay close attention to the things they rap about — and just as interestingly, don’t rap about — and how they rap about them. I’d love see an academic article that really digs into this aspect of the album.