You mustn’t have actually thought there was a chance I wouldn’t like this, right? This provides exactly the same kind of sensory overload that makes me love Mahler and Yes and electric Miles Davis so much. It’s actually amazing how soon I knew I was going to love this. I suspected I would as soon as I saw the art, actually. But I knew this was going to be my kind of album within the first minute.

So, let’s look into that first minute a little more closely.

‘Journeyman‘ begins with three simultaneous sound qualities: something that sounds like a cymbal roll with mallets, a noise like windswept paper kept down low in the mix, and a series of slow, rhythmic bworps. The bworps set the tempo for the track and act as the first source of tension. (What will the next bworp sound like? And the next?) Eight or nine bworps in, they begin to change more perceptibly, like Tobin is turning up the cutoff frequency on one of his ad-hoc synths (which may be what he’s doing, although I’m not nearly well-versed enough in these matters to know).

But, just as it seems like a pattern is developing (the bworps will keep getting higher in pitch), Tobin pulls back on the reins and keeps them consistent, making way for the incoming percussive noises. Note that I didn’t say ‘beat’ — because ‘beat’ would imply that there’s a pattern in play, and other than the steady tempo, there doesn’t appear to be. A series of Wurlitzer-like tones plays in double time to the bworps, with emphases placed seemingly arbitrarily. Certainly, they have nothing to do with what beat of the measure we’re on.

It’s a miracle how Tobin can hold attention with this technique. Patterns, you see, are what makes music make sense. Musicologists and mathematicians agree on that. ISAM works differently; it builds to something, then refuses to follow through, instead choosing to keep going off in new directions. It’s basically the opposite of that kind of music I mentioned in my Belle and Sebastian response — the kind that feels clear and self-evident. This is music where you can always feel a human consciousness pushing and poking at it, ensuring that it never falls into a pattern that feels natural, or straightforward.

Evidently, both extremes can be equally satisfying.

I could really go on about the album, but you’ve assigned me more, and I’m already embarrassingly late on this, so I’d best move on. 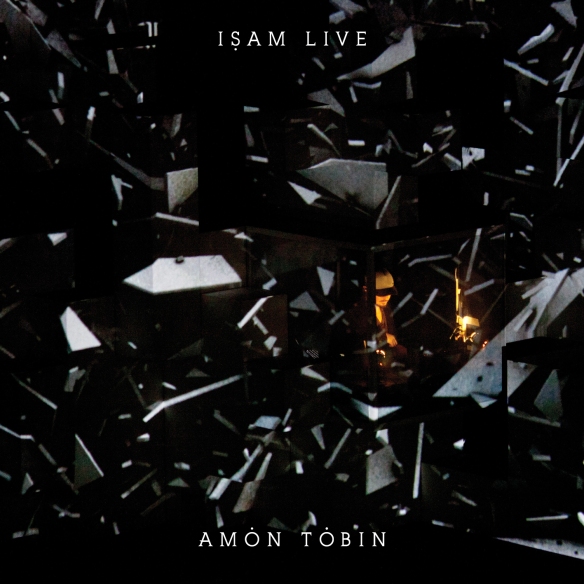 Pretty much as soon as I started watching ISAM Live, over a bowl of Thai coconut soup at my desk, I realized that the visuals were basically going to be the point. There was altogether too much daylight in my living room for me to properly appreciate this sort of dark psychedelia, so I shut myself in my closet with my laptop. I built a little armchair out of pillows and everything:

It struck me as I was huddled in my childlike hideaway that if the pest inspector happened by while I was in there with headphones on, they might well conduct their whole search without realizing I was there. That put me in the exact opposite position to the one Amon Tobin was in during his ISAM shows: had the central cube that he was seated in been just a few shades less translucent, he could have been entirely absent and nobody would have known the difference.

But, before you assume that I’m about to launch into a facile and uninformed indictment of live electronic music, let me tell you about a similarly elaborate projection-mapped concert that I’ve been to. Roger Waters’ 2010-13 touring production of Pink Floyd’s The Wall is in every sense the most spectacular live event I’ve experienced. The basic premise of the show is that throughout the first half, a giant wall is built between the band and the audience, for metaphor reasons.

The show was a rejig of Pink Floyd’s original Wall tour from 1980-81, which was inspired in part by Waters’ anxieties about stadium rock shows. At those gigs, most of the audience is so far away from you that you may as well just be miming. So, Waters decided to test his audience’s trust by literally building a wall between him and them on the next tour. The original Wall show even started with a “surrogate band” playing the first song in Pink Floyd rubber masks.

Waters’ recent remount of the show brought these themes into even starker relief, since it’s an open secret that he can’t sing anymore and most of his live vocals are mimed to backing tracks. When I saw The Wall, I found it curiously easy to get past that, considering my classical background, etc. I just accepted that Waters did not serve a musical purpose at that show, but a semiotic one: The Wall is his masterpiece and his story. His presence adds power, whether he’s actually singing or not.

I don’t know enough about the kind of music Amon Tobin makes to be able to tell what’s going on in his little control pod. It seems like the music on ISAM Live is sufficiently different from the studio version (and sufficiently more predictable, suggesting that maybe he has to let certain processes run their course while he focuses on other things) that I’m quite certain he’s driving the show somehow.

But, it kind of doesn’t matter to me. If prog rock god Roger Waters can mount a show where his musical participation is immaterial, then we’re obviously past the point where ‘he might not even be doing anything’ is a sufficient argument against any live performer.

ISAM Live is not a stunt or a high-wire act. It is not a Magma concert. It is an immersive aesthetic experience — the home viewing of which demands a decent pair of Sennheisers and a darkened room (or closet). Tobin could be sitting perfectly still and staring into space in that central cube while his album plays, and his simple presence at the centre of the set — the creator of this beautiful thing — would still be symbolically resonant. The fact that he chooses instead to work for his living each night makes me love him all the more.

Jesus Christ, I still have to write about the DJ set.

Okay. I’ll keep this brief. Because, regrettably, I didn’t get much out of Tobin’s Two Fingers persona. I talked a bit in my Beardyman response about my confusion over not dancing to dance music. There’s a huge gulf between Two Fingers and Beardyman, clearly. And that gulf means the difference between me being able to listen to it and not.

I could listen to Beardyman, because his music strikes me as ‘listening music’ that put on dancing shoes semi-ironically. It’s jokey and deconstructivist, and the thought of anybody dancing to it still seems a little weird to me. Two Fingers, on the other hand, is a skilled peddler of ‘straightup dancefloor devastators,’ in your memorable phrase. Maybe someday I’ll understand why people listen to music that’s intended for the dancefloor. But yesterday was not that day, nor is today. Tomorrow’s not looking promising.

And as you know, I’m not likely to actually dance to it, either. I’m not the audience for this.

Now let me close out this more-discursive-that-usual response with a random thought that doesn’t really connect to anything.

It seems to me that a DJ set is the opposite of a live classical music performance. DJs are basically improvising: they’re spinning out a unique, spontaneous product that is paradoxically produced with pre-existing musical ingredients that are set in stone (or rather, vinyl; or ephemeral digital something-or-other). At the classical concert hall, they’re going for a performance that adheres to the composer’s score, while having no pre-existing sonic building blocks to construct it from.

I know which of these poles I prefer, aesthetically. But, at this juncture in our correspondence, I’m not sure which one can claim more of my respect.